For the live action movie, see Parasyte: Part 1.
For the anime, see Kiseijū: Sei no Kakuritsu. 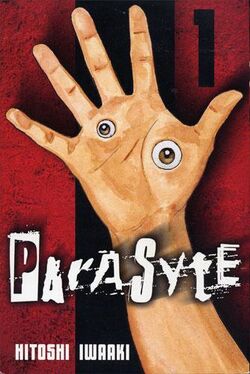 Kiseijuu (寄生獣, lit. Parasitic Beasts) is a horror sci-fi manga series written and illustrated by Hitoshi Iwaaki. It centers on a boy named Shinichi Izumi who lives in a world where aliens suddenly invade the planet and take over human bodies. One alien tries to take over Shinichi's body, but fails. He ends up residing in Shinichi's right hand and the two are forced to co-exist as allies against other parasites looking to kill them.

They arrive in silence and darkness. They descend from the skies. They have a hunger for human flesh. They are everywhere. They are parasites, alien creatures who must invade and take control of a human host to survive. And once they have infected their victims, they can assume any deadly form they choose: monsters with giant teeth, winged demons, creatures with blades for hands. But most have chosen to conceal their lethal purpose behind ordinary human faces. So no one knows their secret except an ordinary high school student. Shin is battling for control of his own body against an alien parasite, but can he find a way to warn humanity of the horrors to come?

Retrieved from "https://kiseijuu.fandom.com/wiki/Kiseijuu?oldid=11920"
Community content is available under CC-BY-SA unless otherwise noted.