17-year-old Shinichi Izumi lives with his parents in a quiet neighborhood in Tokyo. One night, worm-like aliens called Parasites invade Earth, and they take over humans by entering through their ears or noses to get to their brains. One Parasite tries to crawl into Shinichi's ear while he is sleeping, but the teenager is wearing headphones so the Parasite enters his body through his arm instead! The Parasite named Migi ends up taking over Shinichi's right hand.

Because Shinichi was able to prevent Migi from traveling further up into his brain, both of them are able retain their separate intellect and personality. They end up fighting other Parasites who attack them after realizing that Shinichi's human brain is still intact. These other Parasites devour humans as food, and Shinichi ends up fighting them with Migi's help. As the two of them encounter more Parasites, they end up forming a strong bond as they work together to survive. 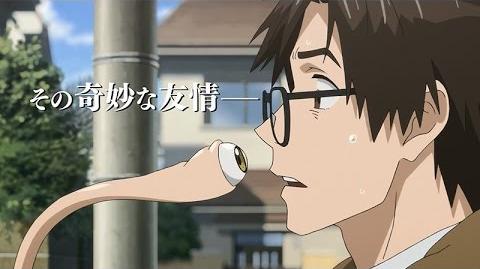 Retrieved from "https://kiseijuu.fandom.com/wiki/Kiseij%C5%AB:_Sei_no_Kakuritsu?oldid=11660"
Community content is available under CC-BY-SA unless otherwise noted.